“Accelerate to the finish line”

Type 1 diabetes (also referred to as Juvenile diabetes) is an autoimmune disorder in which the pancreas stops producing insulin. There is nothing a person can do to prevent the disease nor is there currently a cure. There have been strides made over the last 20 years that help Type 1 patients monitor and control their blood sugar levels. There is ongoing research and study that is zeroing in on a cure for the over 1.25 million Americans that have Type 1. The research and study take funding. The largest organization that supports this research is the JDRF (Juvenile Diabetes Research Foundation).

Our youngest son is now 18 years old and was diagnosed with Type 1 when he was 5 years old. He has administered insulin either via a needle or in through an insulin pump for the last 13 years. The JDRF is near and dear to our family as we hope and pray for a cure that will restore the pancreas’ ability to produce insulin. 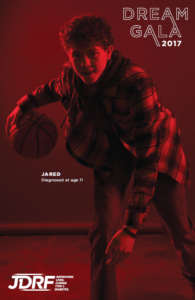 That background brings us to our next focus on Cougar and how Trozzolo Communications in Kansas City chose to use the grade on the 2017 gala event fundraiser for the Kansas City chapter of JDRF. An Adidas catalog featuring NBA superstar – James Harden was the inspiration for the theme to Kansas City JDRF campaign materials. Megan Scott, Account Executive for Trozzolo, pointed out that JDRF liked the inspirational language used in the Adidas piece. Trozzolo used the phrase “Accelerate to the finish line” in this piece because it implies a call to action like a racer that is nearing the finish line. 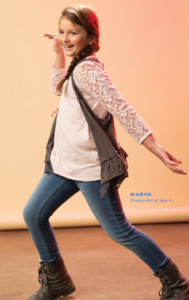 The story of the photography in the campaign is interesting in that all of the photos of youth are of type 1 patients. The “youth ambassadors”, as they are called, are pictured in a studio like setting taking part in their respective hobbies.

One of the highlights in terms of the graphic design for Senior Art Director, Ben Caruba, was how the blue looks different with white lettering on top vs. black lettering on top that was used on opposite panels. It helps draw attention to the message on that panel. The idea of a spot green was attributed to a sample that Marie Langdon, Midland Paper Specification Rep had shared with the Trozzolo team.

The goal of the campaign was to surpass the previous year’s contribution. To that end, the event was a success as it raised over $2 million dollars. The campaign was less formal this year. More of an urban, hip feel this year, like the Adidas brochure. The team at Trozzolo felt that with Cougar® they were able to deliver a quality look to an upscale client with the budget of a non-profit.  Alpine Litho-Graphics produced the multiple print components. That made it a total local team effort.

This project is a testimony on how to utilize ideas from several sources and customize some of what you like from them to make your own project deliver the message that you want in words, pictures and colors.

Subscribe to our Blueline Magazine for more creative ideas and interviews with industry thought leaders.

As a customer marketing manager, John plays a role in marketing some of Domtar’s most beloved brands including Cougar, Lynx Opaque Ultra...

Posted in Spotlight and tagged: